Career Tip 32: Be Likeable – The Most Critical Interview Factor

The Most Critical Interview Factor.

During an interview, be likeable. Quickly. If you don’t, nothing else much matters. Hiring managers consider your likeability, or how well you may fit with the team, as much—and perhaps more—than any other singular hiring factor. Sure, your qualifications, education, experience and record of accomplishments are all important. Yet, no matter how qualified you are, other candidates are qualified as well. Personality and likeability can be what makes you unique. Qualifications win interviews. Uniqueness, often likeability, can result in a job offer

The Job Dog has participated in countless discussions with managers who make hiring decisions. They often say, “A few of the candidates could do the job, yet, the person I want to hire is ____________; I think she would fit the team. I liked her.”

Even when technical skills are critical to the job, you should never underestimate the importance of your ability to demonstrate likeability. To illustrate this point, here is a recent job posting for an IT job at a major university:

“We are looking for someone with exceptional customer service skills that also has a strong technical aptitude. It is our belief that technical skills are easier to teach than customer service skills. Therefore, a positive, helpful attitude, along with strong interpersonal and communication skills, is by far the most critical candidate selection factor.”

This posting is not an isolated example. All employers evaluate candidates in this manner; many employers are not forthright enough to tell it like it is.

Here, then, is the Golden Rule of Career Transition Success:.

If you have had interviews and have not received a job offer, 1) as part of your interview preparation, did you consider what you might say to improve your likeability factor? and 2) did you make a deliberate attempt to break the ice and be likeable? Even when technical skills are critical to the job, you should never underestimate the importance of your ability to demonstrate that you would fit in as part of the team.

How to Be More Likeable During an Interview

If you tend to be nervous or behave in an introverted manner during an interview, you may feel uncomfortable even considering the likeability factor. If this describes you, keep the following points in mind.

Hiring managers, just like most people, like to talk about themselves. If you want them to like you, follow these two simple steps. 1) Listen. Show an interest in their comments, thoughts, experiences, stories, or opinions—even how they break the ice; and 2) Look. Scan the room for pictures, plaques, diplomas, books, magazines, or professional journals, even artwork. Notice an item, and then comment (positively) on it or ask an open-ended question. When you do so, you are on your way to building a friendly relationship.

―Dale Carnegie, How to Win Friends and Influence People

―Dale Carnegie, How to Win Friends and Influence People

Listening, and then demonstrating your interest in the manager’s comments or thoughts, has to be genuine. You only have a few minutes to establish rapport. Nevertheless, take your best shot at identifying a subject of sincere, mutual interest.

Information you learn about each interviewer, including both his/her personal and professional interests, can be highly useful in subsequent interviews. Take notes and listen for details throughout the interview. If the recruiter mentioned where she lived in the past, her job history, where she went to school, what sports interest her—and, by all means, her dog’s name—remember it. You can recall these small details in a future interview or in a thank-you letter.

Here is a list of approaches you can use, either before or during an interview, to create common connections with interviewers.

When appropriate, ask an open-ended question to keep the interviewer talking. Again, recruiters, just like most people, like to talk about themselves to someone who is interested. Smile and agree. When you can draw a parallel to a past event in your life, do so.

A Checklist: 10 Reasons Why People May Not Like You

Here is how others in The Job Dog’s network approached the likeability factor.

Pat, owner and president of a company, still makes sales calls. He once told me, “When I am making a sales call, the first thing I do each morning is to make sure I know a few background facts about the individuals I will be meeting that day. Next, given any common or probable interests, I read articles online or in USA Today that may serve as conversation starters.”

From an article in Inc. magazine, titled Will They Want to Have a Beer with You? John explained how he put together the right team for a rapidly expanding software company by saying, “Hire people who are not only awesome talents, but awesome to be around as well! …The employee you want to take on is someone you can have a beer with at the end of the day.”

Ralph was a highly likeable President of an oil company. Given his national responsibilities, he was always on a plane and meeting people he knew well and others whom he had not seen recently. Ralph’s Human Resources department maintained Ralph’s in-flight manual, which contained the names and pictures of everyone he would or may meet, including any recent workplace updates and conversational information he knew about their family.

To Ralph, it was important that he be able to say, “I read an article that your daughter is captain of the soccer team or that your son was accepted at LSU with a full scholarship.” On the flight home, he made notes in that same file. “John caught his first 10-pound bass; ask if he had it mounted.” “Nate just began his first graduate engineering course; write him a note in December asking him how it went.” Ralph was genuine; he cared. He simply needed notes to keep everyone and everything straight in this mind. Don’t we all?

Rich was not only an outstanding sales trainer, he was the most successful salesperson in the company. I once asked him, “Rich, how did you get so good at what you do?” His response: “Other sales pros sell product; I work hard at finding a genuine common interest with customers and making friends.” His response was what I have come to call The Golden Rule of Sales (or Career Transition) Success: “People Buy from (or Hire) People They Know and Like.” He went on to explain how he listens, facilitates, and looks for mutual interests with his customers. Nothing was insincere about Rich. He genuinely took an interest in others and also let them know about him as a person, not only as a sales representative. Rich would say we are all constantly selling ourselves—or not.

“The way of the world is through other people. If you want to get something done, first find someone with whom you can make a connection.”

Jeffrey Gitmore, an extraordinarily successful sales trainer and blogger whom I follow, says “To begin … I make friends … before I ever start to talk business. I believe that friendship is the basis for open communication.… Open talk, laughter, sharing stories, finding solid common ground … establish rapport with them by finding common ground. By communicating conversationally, the atmosphere is relaxed, and communication is more open. The conversation is natural….” (Find the complete text of Gitmore’s blog post at www.salescaffeine.com, in newsletter #279.)

The Job Dog’s number one rule of sales is “Quickly find a common interest beside the point of the phone call. Get the customer talking about something, anything of personal interest.”

Moreover, especially, when anything enters the conversation about a dog, I always ask the dog’s name, its breed, and a question about the dog’s personality. People love to talk about their dog. Dog people hire other dog people! 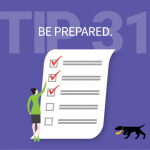 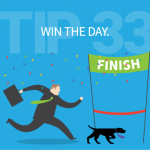 Career Tip 33: Win the Day – The Day of the InterviewInterview Wow